RELEASE DAY! The final split 7" in the series is out today, featuring the excellent NEEDLES//PINS and Epic Problem.

You can stream/buy the record here - http://www.allinvinyl.com/…/623272-needles-pins-epic-proble…

Anyone who subscribed to the series but didn't get their copy yet then email me (don't message me on here as I won't see it!). There are still a few series sets available for anyone interested (http://www.allinvinyl.com/pr…/567800-complete-split-7-series) 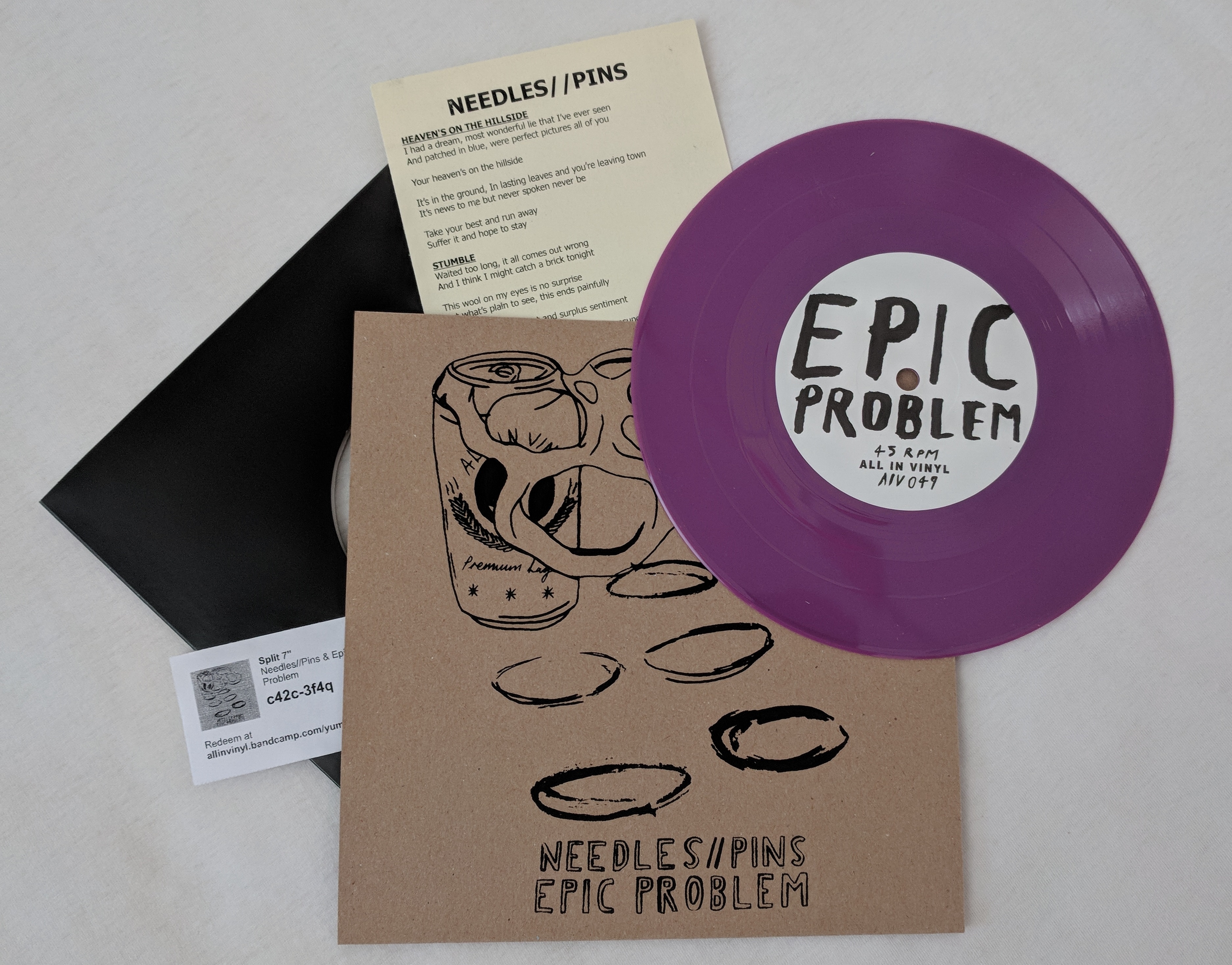 That's right, we are extremely excited to bring you the brand new Down and Outs album! Their 5th album and the 3rd we've been lucky enough to release.

Everything you've come to expect from them from them, relentless sing-alongs from start to finish. Melodic anthemic punk rock at it's finest. It's my favourite Down and Outs album, simple as that!

They've also done several music videos for the record, the first 3 of which can be seen here

In other news, the next 7" in the split series is finally at the pressing plant, it features New Junk City and Hot Mass. We actually got the test presses back yesterday (sounding great!) so the record should be out early April. The last 7" in the series won't be far behind. It features Needles//Pins and Epic Problem and should be out in late May.

The Science Police / Zatopeks 7"s arrived this morning and after a very busy day everyone who subscribed to the series or ordered a copy last week has their record in the post.

All six 7"s from the series are streaming on our site - 1 is already OOP, another is on it's second (and final) pressing and 2 others are very very close to being OOP (less than 20 copies).  I don't want to say which are close to being sold out as last series when I did that we had a surge in sales for those 7"s followed by people flipping them on Ebay.  This way anyone who genuinely wants a copy can get one for a fair price.  If you're interested in any of them, now would be a good time to get involved!

The test press winners were as follows:

If you are desperate for a test press for one of these releases, get in touch as I do have 1 or 2 spare for each 7"

There will be a series 4, and although I have about half the bands confirmed already, I won't be rushing into anything.  More news when I have a firm release schedule - most likely not until early October

So, I finally merged our 2 sites and gave everything a new look.  The main advantage is all the distro records are available to everyone, not just UK residents.  Not only that but stock levels are adjusted automatically so no more emails from me telling you that we've sold out of something - if it's on the site, it's in stock!

I reduced the price of a lot of the old stock, so whilst you are waiting for the first 2014 records to arrive in the distro, pick up a bargain or two.  We only have 1 copy left of a lot of the records in the store, so don't sleep on it!

For now everything is in alphabetical order but as and when we get new stock I'll add it to the top of the site to make it easy to see the latest records we've got in.

I'll post a label update in the next few days - lots planned for the upcoming year.

Today we are very happy to announce the pre-order for Jimmy Islip's debut album, The Wild West Riding.  For those who don't know, Jimmy has been in a variety of UK punk bands in the last decade, most recently The Magnificent.  He has spent much of the last 2 years touring Europe with the likes of Austin Lucas, Digger Barnes and the Revival Tour, with these influences shining through on the album.  We should be receiving the records in 10 days time - I really can't wait, it's such a good record!  If you are a fan of Tim Barry, Drag The River or Chuck Ragan I'm sure you will love it.  It comes with an instant digital download.  A full stream of the album is on Punknews - http://www.punknews.org/bands/jimmyislip

**If you live outside the UK, please order the album here **

**If you live in the UK, please order the album here **

Next week we'll also have the pre-order and stream for The Steve Adamyk Band / Dauntless Elite and Candian Rifle / Zapiain split 7"s - both test presses came back last week sounding great and we're still on schedule to have them ready in 2 weeks time.  We should have the artwork any day now and as soon as we do I'll post it on the site.  We still have a few (about 20) series subscriptions available and if you would like to get one, you can do so here